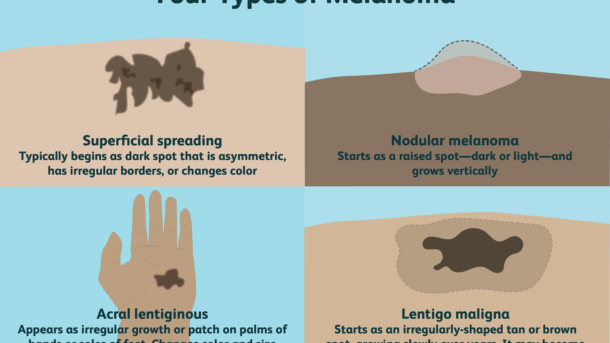 A malignant melanoma or black skin cancer is an aggressive, highly malignant skin tumor that occurs predominantly on areas of the skin that expose to sunlight (e.g. face, neck, arms and lower legs). A malignant melanoma occurs not only on expose parts of the body, but also on other part of skin. In men, skin cancer mainly occur on the trunk (for example on the back), in women mainly forms on arms and legs. Skin cancer may also develop in “hidden parts of the body” such as the feet, the genital area, the scalp or the skin underneath a nail. Fair-skinned people with weak browning tendency are more likely to develop melanoma. Compared to other types of skin cancer, the black skin cancer spreads relatively early to other organs (metastasis).

The term melanoma indicates that black skin cancer arises from the pigment cells so-called melanocytes, which are responsible for skin color. Melanocytes are located in the epidermis (epidermis) and contain the pigment substance melanin.

Black skin cancer can grow both in horizontal and in vertical direction. Through the horizontal growth melanoma skin absorbs visible in size. When it grows in vertical direction, it penetrates the blood and lymph vessels of the epidermis. Through theses infested blood vessels and lymph vessels cancer cells spread throughout the body and settle in other organs and multiply there. Basically, skin cancer through these secondary tumors infects any organ (metastasis).

Black skin cancer occurs in various forms. The main types of melanoma are:

There are also rare species of malignant melanoma, which make up a total of about ten per cent of cases. To do this one:

Malignant melanoma has various causes. Important risk factors for malignant melanoma are the excessive exposure to sunlight or UV rays , especially frequent sunburn in childhood, a lighter skin type, large congenital moles (congenital nevi) a family history (ie more cases of skin cancer in the family) and a weakened immune system (e.g. by infections such as HIV , or by drugs)…………………..

The chances of cure are maximum if melanoma is detected at an early stage. Regular independent investigation of conspicuous skin may contribute to early detection. In case of malignant melanoma, Regular self examination of skin is very important in this case. If you found any suspicious sign on your skin than immediately show this to dermatologist.…………..

The most important form of treatment is the surgical procedure. Here, the melanoma is removed as complete as possible. This means that about 1 to 2 cm of healthy tissues around the affected region are also removed to prevent the recurrence of tumor. If the melanoma already formed metastases than different treatment methods such as chemotherapy, immunotherapy, vaccination or radiotherapy or combination of radio and chemotherapy are used. But mostly this will only lead to a short term improvement in health……………

You can prevent melanoma by avoiding external risk factors. Especially for very fair-skinned people, it is highly recommended to avoid intensive UV radiation . This applies both to natural UV radiation as well as artificial ( Solarium ).

To prevent skin cancer, it is important to:

In case of any suspicious signs must visits your dermatologist because chance of cure is maximum if cancer is detected at an early stage.